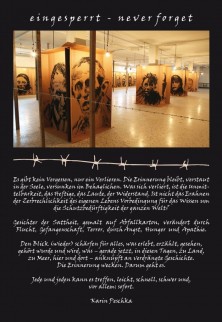 Prosperity’s and social security’s fragility as well as the feeling of being locked up in a freedom reached through an escape, are going to be shown from September 30th to end of December 2015 captured in an art project of Oskar Stocker, an artist from Graz. All the faces on the large-scale paintings find their roots in visions of friends and people of Oskar Stocker’s circle of acquaintances. However the exhibition „eingesperrt – never forget“ does not show colorful screens and cheerful faces. On the contrary: The artist painted 41 haggard, emaciated faces alienated by destiny on discarded packaging board made of brown corrugated board. All donations from visitors are going to help the refugee project „Roof above your head“ of the Rotary Club Graz-Styrian armoury. The exhibition ran from September 30th to December 23rd, 2015.